A tour around Tyrifjorden, a lake in Norway where I grew up 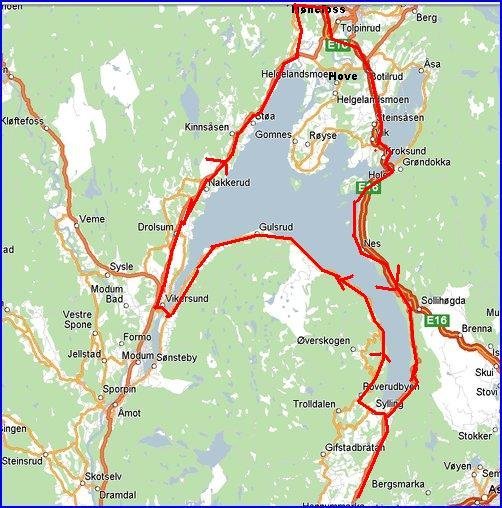 No pictures, I am afraid.

This is a tour I used as both a regular tour for the fun of it (cycling IS meant to be fun) and training for bigger tours. I think I did this tour 3-4 times in my life. I also did it anti-clockwise 2 times. This report is from my second tour.

I was on holiday at my parents house that summer. My sister was living up the road and my 12 years old brother wondered if we could do the first 12 km of the tour together up to my sister's house. Me on my racing bike and he on his mountain bike. My parents also wanted me as an guarding angel. With my many crashed, I was a more suitable angel of death than an guardian angel. But these words fell on deaf ears... So we set off up Lierdalen towards Sylling early that sunny morning. My brother was and still is far smarter than myself so he had a comfortable ride behind my bike and big neck. As the guardian angel, I was not allowed to ask him to cycle in the front....
The road up to Sylling was very flat so we made good progress. The road through Sylling contains a rather big hill past the church, so we climbed up this hill and I bid my brother farewell at the top of this hill. He had hardly done any cycling up to that point, but I knew the remaining four kilometres of his tour had two rather big hills which he did not know about. But he survived those hills even without me as the guardian angel and he is still alive.
I headed up the 45 km road over to Vikersund. First a bit down to the bottom of the a one kilometre long hill-climb. The climb is not too steep, but I took it easy up here due to the severity of this tour. I was saving energy, in other words. From the top of this hill, there was a two kilometres long descent to Tyrifjorden at Holmenvika again. Holmenvika was and probably still is a popular beach. Me and my family spent many evening there when I was a child. The road was flat for a couple of kilometres before it started to gently climb over some farm-fields again. The road between Holmenvika and Vikersund is very good for cycling because it is both technical challenging and very rewarding when you get it right. It is also a very twisty road. I hate driving it, but love it on my bike. This road is not too hard either and it offers some stunning views towards Tyrifjorden. So I made good progress past Gulsrud and to Vikersund.

Just before this village, the road crossed the river on a very old single track bridge and I then reached Vikersund, two and a half hours after leaving Sylling. I was now heading north towards Hřnefoss. The road out of Vikersund rose a bit before a crossroad. The road to the left was going to Hallingdalen and Bergen 550 km further to the west. I was taking the 30 km long road to the right towards Hřnefoss and the north end of Tyrifjorden. The road was pretty flat before it descended down to the bottom of the hill taking me up to my cousins and my late uncle's house. When I did my rounds around Tyrifjorden, the house had been sold on many years before. But this house on the top of this one kilometre pretty steep hill will always be my late uncle's house in my mind. The believed this house to be in Nakkerud. But a closer look at the map reveals that the house is in a place called Drolsum, or just before Drolsum. I took a one minute long respectful breather in the memory of my uncle outside this house before I had a banana. The loss of my uncle was a big loss for my family and not least; his three sons. All of them are alive and well as I write these words.
The road continued along a pretty flat piece of road before it dropped again down to a small river and then went into a vertical climb towards Nakkerud. This is the hardest climb on the Vikersund to Hřnefoss. On the top of the climb, there is/was a small shop where I got some bottles of water and some chocolates.
The road continued over some farmlands and then dropped down towards Tyrifjorden again before I entered a crossroad where I could shortened the road with 10-15 km by going over Hove. But I choose to go up a new hill again towards Hřnefoss. This is the third major hill on this road. The road from Vikersund to Hřnefoss is a road I have a healthy respect for. It is a road where I get nothing for free. The descents is sharp and challenging. The flat pieces is hard enough in wind. The climbs are hard. These 30 km is a meat-grinder. But I was feeling OK when I arrived at the small town of Hřnefoss.
I had a small break in Hřnefoss before I followed the heavy traffic up to Ringerike Hospital and the mainroad to Tyrifjorden again. These 10 km down to Tyrifjorden is pretty boring and has some heavy traffic. Some of the road is also normal road with no cycle tracks. There are a couple of sharp climbs here too and these 10 km is some of my least favourite kms anywhere in the world. I should know because I have done it around twenty times on a bike and too many times in a car. The views was OK though so not too many complaints. There is a 5 km long dead flat piece of road here called Steinssletta which was pretty bad in heavy traffic. I was glad when I reached the end of it and the climb up a hill with a good cycle track. That cycle track took me over the hill and down to Tyrifjorden where an old bridge at Kroksund took me over a small inlet over to the east-side of Tyrifjorden. Two kilometres after this bridge and a small hill-climb, the main road over to Oslo took off into some long tunnels and the old road, with no traffic, has been made into a quiet cycle road.

I am not a fan of this cycle road or the east side of Tyrifjorden at all due to the unfortunate fact that this road has always come at the end of a very long, painful cycling trips. When in pain and exhausted, the last thing I want is a technical challenging road with a big climb at the end of it. Like for example this road. A road I have always hated with a passion. I have done this road with a faltering bike, cramped up legs, little water and burst lungs. I have a lot of very bad memories from this road.

At this tour in 1991, I was feeling not too bad. The Vikersund to Hřnefoss had taken a lot out of me as I had planned. But I was still very much alive during the technical 5 kms to the bottom of the hill towards the highest point of the tour; the 3 km long pretty steep climb to Skaret. I hit this climb with caution and took it easy up while I was admiring the views. And the views both during the climb and at the top of the hills is breathtaking. Due to the sun, the climb was also exposed and I got some nice suntan where I climbed up to this top. The road flattened out past the toll-road huts (now demolished) and to Skaret where I took the road to the right down the hill towards Sylling again. The 12 km road to Sylling is pretty gentle with a couple of small hills. But most of this road is either flat or going downhill. I passed Sylling and took the final pretty flat 15 km down to my parent's house. A small steep 1 km climb up there marked the end of a good tour.

This tour is in my view a superb tour with excellent riding and views throughout. It is a hard and technical and tactical difficult tour. It is therefore ideal training for longer weekends or week long tours. The road from Sylling to Vikersund is also excellent for cycling. Hřnefoss and the heavy traffic can be bypassed five km before the town by cycling over Hove. You then end up at Steinssletta. I have done it once and I recommend it. See the map. I did not take any pictures at all during my many tours around Tyrifjorden. But I still remember this tour with a lot of fondness.

This tour is highly recommended.